Almighty Allah says: { In cattle there is a lesson for you: We give you a drink they carry in their glands, that issues from betwixt a secreting mucus* and blood } (Qur’an 16:66). The Almighty One also spoke in the holy Qur’an about paradise, saying: { In it are rivers of water that does not turn brackish, and rivers of milk which taste does not change } (Qur’an 47:15).

Although milk is regarded as a simple substance, it constitutes a natural and integral part of the composition of three categories of needed nutrients** -that is: (1) water; (2) fat; and (3) cheese. As for cheese, its temperament is cold and moist. It provides the body with complete nourishment, and it contains high levels of protein, antibodies, and calcium, among others. The temperament of fat in milk is moderately hot and damp. It agrees with the natural disposition of a healthy body, and it offers numerous benefits. Moreover, the fat in milk allows for greater absorption of fat-soluble nutrients into the bloodstream via the intestines. And finally, the temperament of water is hot and humid. It acts as an attenuant needed for bowel movement, and as a general moistener for the body.

Altogether, the temperament of milk is cold and humid. However, some say that it earns its attribute of hot temperament immediately upon milking, and it is best drunk when freshly milked, because its nutritional value decreases by the hour***. Fresh milk is the best. It is cold and humid, and it generates chyme. When milk turns sour, its temperament becomes hot.

Good milk has a bright white color, it produces an appetizing aroma, it is agreeable to the taste, it has a delicate sweetness, a stable consistency, and balanced fat contents.

The quality of milk for a newborn is usually selected after forty days of the child’s birth****. The animal must be young, corpulent, and strong. Furthermore, the animal must be feeding on good fodder, grazing on good pasture, and drinking unpolluted waters. Such milk will generate healthy blood, provide complete nutrition, and promote healthy growth in the infant.

As for adults, good milk helps alleviate depression and distress. It calms the spirit, and benefits in the treatment of illnesses of the black bile. Drinking milk with honey cleanses internal ulcerations caused by putrefacted humors. Drinking milk with sugar beautifies the complexion and causes plumpness. Drinking milk prevents any harmful effects of sexual intercourse. It benefits the bronchi and lungs, and is beneficial for sufferers of tuberculosis.

Drinking milk excessively is bad for headache, the stomach, the kidney, and the spleen, and it can hurt the teeth and the gums. This is why one must rinse one’s mouth with water after drinking milk. It is reported in the two collections of prophetic traditions that when God’s Messenger صلى الله عليه و سلم had some milk, he would call for water to rinse his mouth. God’s Messenger صلى الله عليه و سلم once commented, saying: “It contains a greasiness.” (Reported by Bukhãri and Muslim).

Drinking milk is bad when suffering from fever or cold, and it can harm the brain 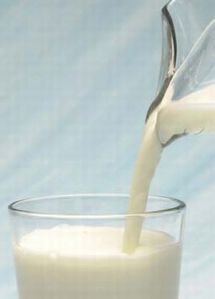 A glass of fresh milk

because of the rapidity with which it converts into bile. Ibn ‘Abbass, God be pleased with him, narrated that God’s Messenger صلى الله عليه و سلم said that the fat of milk was bad for the feverish and for those who suffer from headache (Reported in sahïh Bukhãri and Muslim). Drinking milk regularly and excessively can cause dimness of sight, aching of joints, obstruction of the kidney, gasping, or souffle in the stomach and the intestines. All of these reactions, among others, can be rectified by adding honey, eating ginger, sweet preserves, or similar food together with milk. It must be noted here that such negative effects as well as some allergic reactions to milk happen mostly to those who abstain completely from drinking milk, and particularly those who are not accustomed to drinking it.

**Milk is very low in iron and ascorbic acid, and it is low in niacin. Calcium and phosphorus levels in milk are very high. Vitamin A levels are high in whole milk. The composition of whole milk is approximately 4.9% carbohydrate, 3.5% fat, 3.5% protein, and about 87% water.

***Riboflavin is present in significant quantities in milk unless the milk has been exposed to light.

****Initially, and before milk is produced, the mother’s breast produces colostrum, a deep-yellow liquid containing high levels of protein and antibodies that will help the infant resist the bacteria and viruses that cause illness. Then the mother’s hormones change into a blue-white color with a very thin consistency.